Those interested in how personality affects performance often study the Myers Briggs Type Indicator (MBTI) or Emotional Intelligence (EI) and the relationship to leadership.  Rarely do I run across studies that look for relationships between MBTI and EI.  Leary, Reilly and Brown published a Study of Personality Preferences and Emotional Intelligence where they examined the “relationships between the dispositional factors measured by the MBTI and elements of emotional intelligence (EI) as measured by Bar-On’s emotional quotient inventory (EQ-i).”

For those unfamiliar with the MBTI and the EQ-I, the MBTI measures our preferences for how we like to receive information.  The EQ-i measures our emotional quotient or EQ.  Emotional intelligence has often been defined differently by various authors.  One of the easiest ways to think of emotional intelligence is by defining it as the ability to understand your own emotions as well as those in others.

In the Leary et al study, their results showed a relationship between Myers Briggs extroversion and emotional intelligence components.  Also noted in the study was a “positive and significant relationship between a preference for the use of feeling in decision making and an individual’s EI.”

I found the relationship for “feeling” to be the most interesting part of the study due to the high number of “thinking” as opposed to “feeling” executives in the workplace.   The study suggests that using “feeling” when making decisions shows awareness of others’ feelings.  This would be indicative of having emotional intelligence.

If there are more “thinking” people in business executive positions and this study showed people that were “feeling” had more of a relationship to emotional intelligence, what does that say about our business leaders?  A study of nearly 5000 people by Sala revealed that executives may have an inflated idea of how high their emotional intelligence actually is.  “The results of this study demonstrate that higher-level employees are more likely to have an inflated view of their emotional intelligence competencies and less congruence with the perceptions of others who work with them often and know them well than lower-level employees.”

What is interesting to note is that one’s MBTI type does not usually change over time.  However, one can develop their emotional intelligence.  The “thinking” personality type bases their decisions on data.  They tend to be logical.    If people with a strong “thinking” preference do not show as high of a correlation with emotional intelligence now, can they develop this based on their understanding of this data?   It seems logical to conclude this is possible.

As with any self-reported data, there are possible limitations to these studies.  I personally have studied emotional intelligence and its impact on sales performance.  I had to take the EQ-i and the MBTI in my training to be a qualified instructor for both assessments.  I came out as an ESTJ and had a high EQ-i score.  I may be an anomaly, but from what I have seen from the work of Daniel Goleman and others, whether someone is a “thinking” or a “feeling” personality, it is important to always be working on one’s EQ in order to be successful.

Can’t Afford to Take the Myers Briggs MBTI? A Free Way to Determine Your Personality Type and Job Preferences

Myers Briggs MBTI personality assessment is one of the most reliable and valid instruments on the market.  Employers and job-seekers alike have found the results to be useful to explain personality preferences and match job applicants to appropriate positions. However, in a tough economy, not everyone has the financial resources to take the actual MBTI.  While, there are a lot of free MBTI-like tests on the Internet, most of them are set up to obtain your email address for future promotions.  Although I highly recommend taking the actual MBTI, there are other ways to get an idea of your individual personality preferences.   The following is not nearly as reliable or valid as taking the actual MBTI, but it can give you some insight as to where you fall within the personality types described by Myers Briggs.

Wikipedia does a nice job of explaining the MBTI model and Myers Briggs work.  The site explains that  “individuals are either born with, or develop, certain preferred ways of thinking and acting. The MBTI sorts some of these psychological differences into four opposite pairs, or dichotomies, with a resulting 16 possible psychological types. None of these types are better or worse; however, Briggs and Myers theorized that individuals naturally prefer one overall combination of type differences. In the same way that writing with the left hand is hard work for a right-hander, so people tend to find using their opposite psychological preferences more difficult, even if they can become more proficient (and therefore behaviorally flexible) with practice and development. The 16 types are typically referred to by an abbreviation of four letters—the initial letters of each of their four type preferences (except in the case of intuition, which uses the abbreviation N to distinguish it from Introversion). For instance:

And so on for all 16 possible type combinations.”   In order to discover your 4 letter type, you must consider how you prefer to obtain information, what energizes you, how you make decisions and how you approach life.  The chart below lists some words and phrases that may best describe your personality. 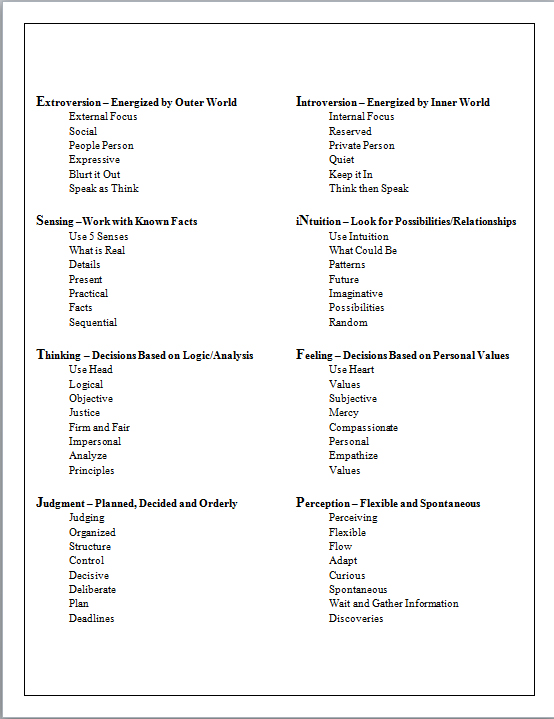 Using the chart listed above, look at the qualities listed under each of the headings and pick the letter that best represents you.  You will pick either either an E or I for extroversion or introversion; an S or N for sensing or intution; a T or F for thinking or feeling; and a J or P for judgement or perception as the personality type that you feel best represents you based on the words listed below each heading.  In the end you will have a 4 letter type.   Once you know that 4 letter type, you can look at the chart below to look at jobs that match well with your personality preferences.