Building Curiosity in the Workplace Curiosity, Motivation, and Drive

It is clear that survival is a key stimulant for curiosity and we’ve looked at how curiosity can change depending on age.

So what about motivation? What motivates us? And what is the correlation, if any, between motivation and curiosity? Assuming the two are connected, which happens first? Does motivation drive us to curiosity? Or does curiosity lead to motivation?

These are the types of questions I had to find answers to. Again, I was curious. For example, did my curiosity about the subject of curiosity motivate me to write this book? Or was I already motivated, and therefore became curious to learn more about the subject so I could write it? 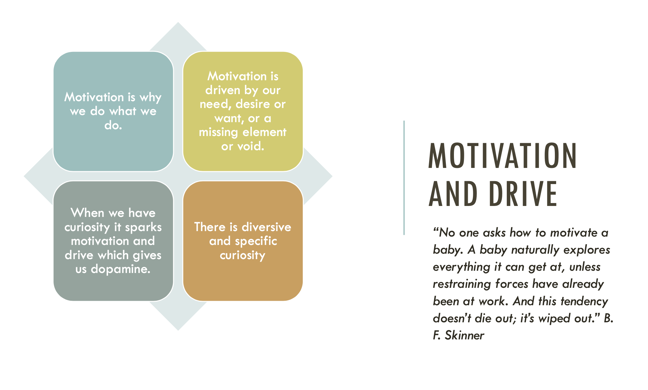 Let’s go back to the beginning.

Motivation is why we do what we do. We can typically find motivation for taking a certain action or believing a certain way by filling in the blank: I do an action because_____. I exercise because I want to be healthy when I am older. I work at my current job because I need the benefits. A motive is what prompts us to act in a certain way, or at least to develop an inclination for a specific behavior.

Okay, so curiosity is the interest to learn more about a subject; motivation is the desire to do something with that information. From my own studies, from the scientific research, and from the stories of professionals and motivational speakers interviewed on my program, there’s agreement that..

Our motivation is driven by a combination of three factors:

Some individuals are motivated by the notion that something is missing in their lives. The most vivid examples can be found in individuals who have physical drawbacks. From blind musicians such as Ray Charles and Stevie Wonder to the extraordinary achievements of Helen Keller, there are millions of people whose motivation and curiosity have been enhanced by a void in their sensory abilities.

These individuals are like many who have suffered similar mishaps or shortcomings, be they mental, emotional, or physical. Driven by those shortcomings, they illustrate the power of curiosity and motivation.

“Human beings have an innate inner drive to be autonomous, self-determined, and connected to one another. And when that drive is liberated, people achieve more and live richer lives.” .Daniel H. Pink [1]

To uncover some misconceptions about what drives us, I found insights in the book, Drive: The Surprising Truth About What Motivates Us, by Daniel H. Pink.

In his book, Pink provided an interesting study of how reward, fear, and punishment play into our drive, motivation, and curiosity. Fear and punishment, he concluded, do not motivate us or give us the drive to want to be more curious. Rather, our desire to learn and explore is better driven by reward and by viewing learning as a choice rather than a requirement.

He explained how intrinsic motivations are renewable, like solar power and pointed out that those who are intrinsically motivated will outperform those driven by external rewards. Therefore, it’s important to focus on the internal rewards that we can realize from developing a sense of curiosity.

Pink also described how our early childhood can play into our curiosity and drive. If we’re involved in actions and behaviors that we don’t find rewarding, we won’t continue to explore new ones. If people lack curiosity toward something, they might have received a negative consequence for pursuing things in the past. For example, if parents used negative reinforcement to get their kids to avoid exploration, the child might fear exploring.

While curiosity might spur the release of dopamine, if we have had enough negative rewards associated with exploration, it could have a much different impact. That’s what causes us to recall past incidents and how we were rewarded or punished for inquisitive behaviors.

Further, not all things will be equally fascinating to us upon discovery. If we explore an area that we find uninteresting, it’s important not to give up and assume that exploration is a waste of time. Rather, it indicates that perhaps other areas of exploration might be more rewarding.

Going deeper into the scientific realm, in his classic 1890 publication The Principles of Psychology, William James [2] described two other types of curiosity.

The first is an instinctual arousal to an unfamiliar object. Imagine our fascination being introduced to our first computer. That fascination, according to the famed psychiatrist, was instinctual. The second type of curiosity is what James described as a scientific curiosity and metaphysical wonder in which

The underlying belief was that either form of curiosity was sufficient to compel us to some form of motivation. Hence, curiosity yielded motivation.

For the longest time, that belief seemed to withstand scientific scrutiny. In the early twentieth century, scientists assumed that curiosity was one of the basic human drives, along with hunger, thirst, and sex. But the research took a new twist when researcher Daniel Berlyne found more nuance to the connection between curiosity and motivation.

Berlyne also divided curiosity into two types, which he described as diversive curiosity and specific curiosity [3].

Berlyne further concluded that curiosity can be aroused by external stimuli such as complexity, novelty, uncertainty, and conflict. And here’s the important part: if an external stimulus is too low, there will be no motivation to explore it. If a stimulus is too high, it will result in anxiety, almost paralysis. If it’s just right, it will result in the desired exploratory behavior.

For example, think of the end of your company’s fiscal year when the bosses want you to meet and exceed your financial quotas. If the incentive is only a five-dollar bonus for another sale, it hardly seems worth the effort. On the other extreme, if the incentive is a $10,000 bonus for fifty more sales, it may seem out of reach and therefore equally non-motivating. According to the research, we are motivated only when the stimulus seems reasonable and attainable.

Hence, motivation is tied to the levels of curiosity with which we are presented. Just like Goldilocks and her three bears, if the curiosity is too low, we’re not interested. If it is too high, we’re scared off. However, if it’s just right, we’re motivated to act on it.

Other studies have suggested the same. Our knowledge gaps, which are the basis of our curiosity, must feel manageable for us to be motivated to act on them. Consider the animal that seems curious about your presence and even exhibits a desire to come closer, yet it is repelled by the fear of the unknown, the unmanageable.

Berlyne concluded that curiosity and thus motivation are aroused by a combination of complexity, novelty, uncertainty, and fear. But what about the curiosity and motivation that have no tangible benefit? What is it that motivates video gamers to undertake endless challenges for no traditional reward?

For example, what induced millions of people around the world to play a video game called Cube? The game (originally titled Curiosity but changed to avoid confusion with the Mars explorer of the same name) is a collection of cubes or cubelets to navigate through to get to the center. Indeed, it’s a high-tech version of the popular Christmas wrapping game in which a gift is embedded in multiple layers of wrapping paper. Participants or recipients are challenged to get to the final layer of paper and find the gift. 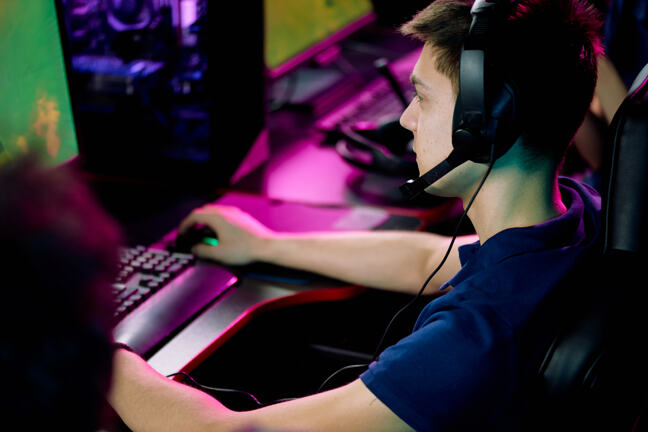 It is clear that curiosity and motivation are essential to our being productive, healthy, and happy. It is also clear that the two must work hand-in-hand for us to achieve whatever goals we set for ourselves: personal, professional, or altruistic.

Further, our curiosity and motivation can take us in positive and constructive directions or toward less positive or sinister outcomes. That’s where choice comes into play.

For now, we conclude that, like love and marriage, horses and carriages, peanut butter and jelly, curiosity and motivation must go together to function properly, regardless of which came first.

Stated another way, are we curious only about the things we are motivated to learn or do? Or are we motivated or driven to pursue initiatives without being curious to learn more about them?

According to behavioral scientists, it depends. However, the consensus is that it’s our curiosity that serves as the driving force.

The Puzzle of Motivation

When we read about drive and motivation, it brings to mind some great books and TED talks.

In Dan Pink’s TED Talk, he examines the puzzle of motivation because traditional rewards aren’t always as effective as we think. He shares the results of several experiments that demonstrated that incentives could have the opposite intended impact, especially when tasks are more complicated. Providing money or other incentives to improve right-brained conceptual tasks will probably not work.

Too many organizations are basing decisions on people and talent based on outdated and unexamined information instead of focusing on intrinsic motivation. He explained that for people to be interested and feel important, they should have autonomy, mastery, and purpose.

What do you think? Are we curious only about the things we are motivated to learn or do? Or are we motivated or driven to pursue initiatives without being curious to learn more about them?