Boomerang Generation: College Graduates Giving up on Employment and Moving Back Home 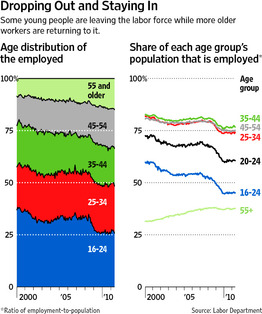 There has been an unusual trend with recent college graduates.  After working so hard to become educated for their new careers, recent grads are not jumping into the workplace right away.  This has caused an increase in the numbers for unemployment in this population.  However, this unemployment has been influenced by some of these grads actively making the choice not go to work.

It’s not only that employers don’t want the recent graduates. In fact, Wall Street Journal reported, “Employers plan to hire 19% more new graduates this year than in 2010.” Part of the choice has been due to the graduates opting to do other things. In that same article, it was reported, “Career counselors at colleges say that in the past two years they have seen increasing numbers of graduates opting to travel, volunteer, or get unpaid work experience rather than head straight into a tenuous job market.”

Recent statistics show that up to 54% of those under the age of 25 are without a job. Many of them feel that the economy is so bad at this time that they would be wasting their time even trying to get into the workplace.  This has caused a trend of young adults moving back in with their parents.  The New York Post reported, “This year, some three million young people are expected to graduate from college. Facing a double-digit unemployment rate for young people, 85 percent of them will initially move back home with their parents, and that’s up from 67 percent in 2006, according to a poll by researcher Twentysomething Inc.”

Some have referred to this new generation as the Boomerang Generation.  Just as parents think their children have left the nest, they turn around and come right back.  Some students are holding out for the job they want rather than taking “just any job”. Having gone through the time and effort to get a higher education, they are not willing to take employment beneath what they feel qualified to do.