The University of Cambridge recently published study in the Journal of Biological Psychiatry that provides insight into why some people are more aggressive. Scientists have known that when people haven’t eaten or are overly stressed, they have a harder time controlling their anger. Scientists now have the ability to use technology to scan the brain and visualize the connection between serotonin and the ability to handle emotions.

According to The University of Cambridge News, “Although reduced serotonin levels have previously been implicated in aggression, this is the first study which has shown how this chemical helps regulate behavior in the brain as well as why some individuals may be more prone to aggression.”

Healthy volunteers had their serotonin levels altered through diet manipulation. Their brains were then scanned with a function magnetic resonance imaging (fMRI) as researchers measured their reactions to images of faces showing anger, happiness or neutral expressions. The findings suggested that when the serotonin was low, the prefrontal cortex had a more difficult time controlling emotional responses.

According to author Dr. Molly Crockett, “We’ve known for decades that serotonin plays a key role in aggression, but it’s only very recently that we’ve had the technology to look into the brain and examine just how serotonin helps us regulate our emotional impulses. By combining a long tradition in behavioral research with new technology, we were finally able to uncover a mechanism for how serotonin might influence aggression.”

Serotonin has been the subject of many psychological studies.  In 2003 a popular study indicated that there was a gene responsible for people to be more receptive to becoming depressed.  However, in 2009, a study published in the Journal of American Medical Association that analyzed data from 14 studies found that this serotonin gene was not linked to depression.

How serotonin affects depression and aggression will continue to be studied. Currently, the most widely prescribed antidepressants are serotonin enhancers.  The researchers from the Cambridge study hope that this new discovery can help pave the way to new treatments of psychiatric disorders.

What is Ugly Meter? New APP Analyzes How “Ugly” You Are

There is a new app available for Iphones that will allow you to take a picture of someone and then have it run a facial recognition, analyzing whether the person is attractive or not.  The app then makes a comment about their appearance . . . good or bad.

The app is very popular but it is causing debate as to whether this is a good thing to do.  Some see it as harmless fun, while others think it can be causing bullying, leading to psychological distress.

How popular is this app? According to azcentral.com “About two months after its release, Ugly Meter has generated over 100,000 downloads, peaking at No. 3 on the most popular chart.”

How did a beauty like Angelina Jolie rate on their test?  How about Brad Pitt? Check out the results by clicking here. 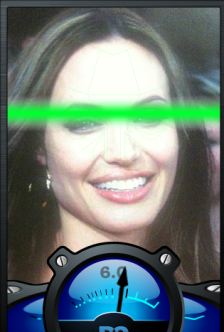