The Ethics of Google

The Ethics of Google

“Don’t Be Evil” is Google’s informal corporate slogan. The founders of Google claimed that this motto explained their culture that “prohibited conflicts of interest, and required objectivity and an absence of bias.” According to Google’s code of conduct page this slogan is, “about providing our users unbiased access to information, focusing on their needs and giving them the best products and services that we can. But it’s also about doing the right thing more generally – following the law, acting honorably and treating each other with respect.”

Can Google do business in an ethical manner if they allow for people to search for unethical content? Laws may decide what is legal, but who decides what is unethical or evil?

Every day someone searches for how to do something illegal and/or unethical through utilizing Google’s search engine. How much content should Google censor?  The following articles address Google censorship issues:

U.S. News reported, “The company is based in the United States, and thus must comply with U.S. laws. As a part of its policy, Google already censors things like child pornography, and complies with copyright infringement requests (a heavy volume of which come from videos uploaded on YouTube). Yet because services such as YouTube and Blogger are popular around the world, the company must decide to what extent it will remove content deemed illegal or offensive to foreign governments.”

On April Fool’s Day the Internet is full of contributors trying to play on our gullibility.  Facebook has its share of people listing today as their birthday or reporting unusual updates.  The following is Google’s attempt at playing the game:

In an article in today’s WSJ.com, they discuss how there is a war going on within the top technology firms to attract the best employees. To read the full article, click here.   As noted in the picture below, Google has over 23,000 employees, Facebook 1700, Zynga 1250 and Twitter 300.  Note that percentage increase in employees is strongest for Twitter with a 203% increase, followed by Zynga with a 178% increase, then Facebook with a 70% increase and Google with a 19% increase since last year. 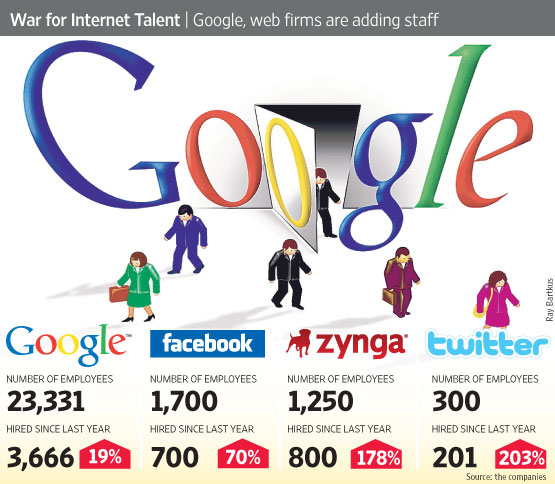 What is a Monopsony? How does it Relate to Companies like Wal-Mart, Microsoft and Google?

Many have heard the word monopoly but have you heard the word monopsony?  This word is becoming more commonly used.  A monopsony exists when there is a market dominated by a single buyer, giving power to set the price for whatever is being purchased.  If there is no competition, the buyer can pay less for what they are purchasing.  Demand all comes from this one source.  This would be the opposite from a monopoly where the monopoly is about supply; the monopsony is about demand.

Some examples that have been given of monopsonies include major employers in a small town, universal healthcare, and the post office. Some very popular companies such as Wal-Mart, Microsoft and Google have also been called monopsonies.

Can a company be both monopoly and a monopsony?  In a white paper about Google, it is suggested that Google’s has a monopolistic hold on search advertising, but also may be considered a monopsony, by restraining digital commerce. Click here to find out more about Google and its stronghold in the technology market.

Monopsony As the Dominant Market Structure of Web 2.o

Find Everything Google Has to Offer on “Google New”

If you are interesting in learning more about all of the products Google offers, you need to check out Google New.  On this site, you can watch videos about all of their latest products.